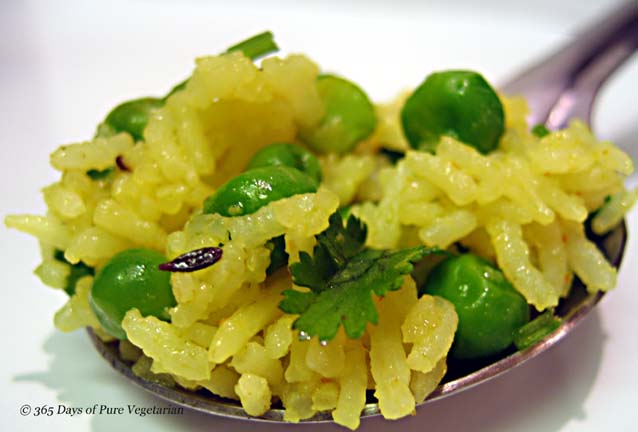 A spoonful of Mutter Pulao

When I think of Pulao that could be made in no time yet not compromising on the taste front, it is none other than Mutter (Peas) Pulao that rings a bell. The pod-shaped vegetable (although botanically a fruit) is seasonal in India. It is in season only during late fall through winter. The taste of mutter is just something indescribable; yet “heavenly” is the only word that could come close to describing it’s taste when it’s in season. Everyday my mom would make mutter sabzi or mutter pulao or something to do with mutter in her cooking yet no one in the family would get tired of eating. I remember that if I used to be mad at something and if mutter was in season, my mom would serve up mutter saag or sabzi and I would just forget everything else. I sometimes wonder hence the name “Peas” as it sounds like “Peace”, that this vegetable makes peace with me! Sounds silly, but those were the childhood days.

Soak basmati rice in water for at least an hour before cooking. this makes a tremendous difference in the outcome of the cooked rice. Then, cook rice with excess water. Once rice is cooked, drain the water and let the rice cool. In the mean time, heat oil in a pan, add cloves & cinnamon stick. When the aroma of the spices has infused through the oil, add jeera, and in a few seconds add green chillies. This is were you get the heat for this pulao, so adjust the green chilies as much as you want. Add the mutter and saute. If you are using fresh mutter, saute them for a few minutes, sprinkle some water, cover it with a lid and let it cook. You can add the turmeric and red chili powder now and mix well. Once the mutter is cooked, add salt, mix and turn off the stove. If the rice has cooled down, add it to the mutter mixture and mix it gently. You don’t want to make it mushy. Add lemon juice as per taste. Garnish with chopped cilantro. It’s fast, simple and delightful.